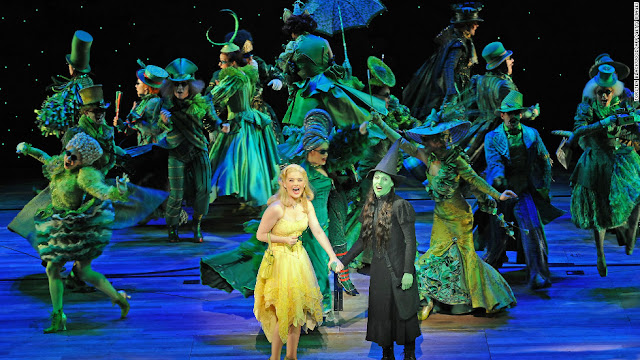 We went to see Wicked, the Broadway Musical, at Keller Auditorium in downtown Portland last night. It was an odd experience for me. Musicals aren't really my cup of tea. They are entertaining enough and my wife really likes them, so I go.
I had read the book a few years ago and enjoyed it thoroughly, so I still had a sketch of the story in my mind. The musical follows the plot well enough. I don't remember the Arrow character at all, but that's okay.
The odd part was I could not understand the words to most any of the songs. I'd pick up a word here or there, but mostly it was just women singing ... something. In between the songs there would be a bit of acting, and these little snippets of conversation managed to carry the story along. It could be that the singing and dancing contributed to the atmosphere, which I am learning is a large part of what can make a show great instead of just good.
The show has a few points to make about the way we treat people. The Wizard's song Wonderful has a few points of his own:


{Spoken:}
Wizard: You See, I Never Had A Family Of My Own, So I Guess I Just Wanted To Give The Citizens Of Oz Everything.
Elphaba: So You Lied To Them.
Wizard: Elphaba, Where I Come From, We Believe All Sorts Of Things That Aren't True. We Call It History.

{Sung}: Wizard:
A Man's Called A Traitor
Or Liberator. A Rich Man's A Thief
Or Philanthropist. Is One A Crusader
or ruthless invader? It's all in which label
is able to persist.
There Are Precious Few At Ease
With Moral Ambiguities, So We Act As Though They Don't Exist.

Was I able to pick up more of this song because it was sung by a man (lower timbre)? Or because the words meant something to me?

Posted by Chuck Pergiel at 2:09 PM