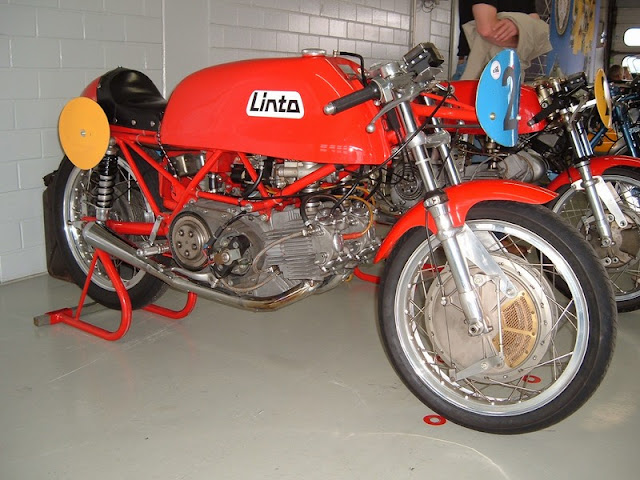 Coupling two Aermacchi 250 cylinders; Lino Tonti (financed by the Citroen dealer Umberto Premoli) created the "Linto 500 GP" a race beast, available for private racers, that competed with good results (Gyulay Marzowszky was second next to Giacomo Agostini in 1969 championship) in the World Motorcycle Championship from 1968 to 1970.
The initial design of the engine was for a DOHC with 4 radial valves, but the funds available were not sufficient and, therefore, the solution adopted was to use the cylinders (72 mm bore) and heads with rods and rockers of the Aermacchi Ala d'Oro 250 with a new block. The Linto prototype, still in developement, produced 65 hp at 12.000 rpm.
Thanks to the high power, good torque, and light weight, the Linto was very fast. Keith Turner, for example, won at the Mettet Internationals 1969, where his bike was timed at 160mph on the Mulsane straight (20mph faster than Norton and Matchless), but was very fragile and, when Tonti was hired by Moto Guzzi in 1969, the developement of the bike ended. - Dogwalker


The trellis frame of the Linto was built by the specialist Milanese frame builder Stelio Belletti, with Ceriani suspension and Fontana drum brakes, resulting in a sweet-handling lightweight 142 kg bike . . . . - Mike Hanlon

Along with producing a great deal of power, the engine vibrated so much that it sometimes caused the frame to crack, which is how this bike got it's reputation for being 'fragile'.

Thank you for the back story on how the Linto came to be. That it was planned as DOHC parallel twin and ended up as it did because of cost cutting makes sense to me. Otherwise, why would one choose this lay out over a 90 degree V twin (like Ducati did with their very similar plan of making a 250 single into a 500 race twin. It seems to me after looking at photos of the 250/350 singles that the V twin would have been pretty easy to do. Too bad Harely could not figure that out!

Yes, the Sportster was a unit construction iron barrel and head 883cc bike. Harley Davidson also had the flat head racers which were 750cc and dominated the 500cc OHV opposition, unless they lost... Harley raced and won at Daytona until the rules were changed in 1969 to allow over head cam and multicylinder engines. Honda won (once), then Triumph several times, then I believe Yamaha and the Tz700 4 cylinder two strokes ended the four stroke reign in racing. This era in the 1960-70's was when the OHV sprint 250 could have easily been made into a 500cc V twin, just like Ducati did at about the same time. It is true that AMF had purchased HD and they were lost in America...

I love Buell's chassis design, his front perimeter brake, the short wheelbase, fuel in frame. I don't like the engine at all and wish he would build a bike for the SV650 engine.