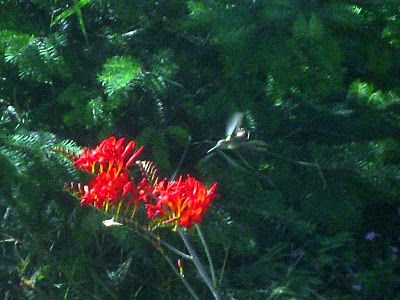 I don't think I've ever seen a hummingbird in Oregon before. This guy was in my back yard. I saw a moth once that was bigger than a hummingbird. The moth had a probiscus that was curled up in a spiral. He uncurled it to insert it in a flower, and when he was done he would curl it up again and fly away. Only saw the moth that one time. This time I had a camera, and I was able to get a shot and a short movie. The hummingbird actually sits on the branch for a bit. We had hummingbirds around our house when we lived in Arizona, but I never saw them sitting still, they were always on the move.

Email ThisBlogThis!Share to TwitterShare to FacebookShare to Pinterest
Labels: Birds