Came across too much good stuff when I was looking up stuff about this movie, so I'm sharing. 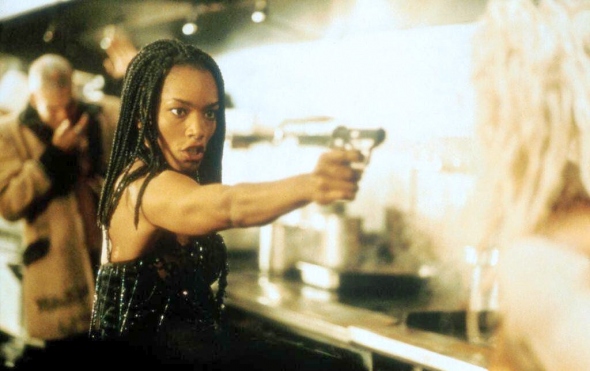 Angela Bassett as Mace facing down a thug with a knife. 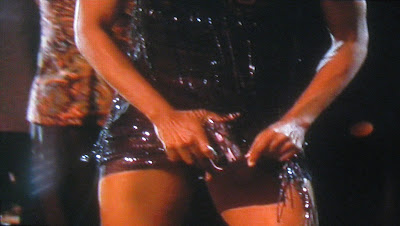 Mace stowing her gun away in a holster that wraps around her thigh under her mini-dress. 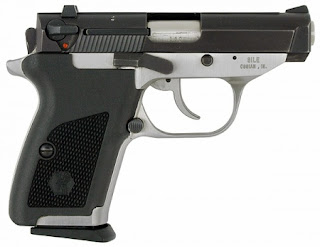 Kathryn Bigelow, the director, was married to James Cameron (one of those guys who makes big, fancy movies like Avatar and Titanic), so maybe some of his techno-crazy rubbed off on her. Or maybe it was the other way around. In any case, she wanted a compact, light weight camera to shoot some of the POV (Point Of View) scenes. Nowadays you could use a digital camera, no problem, but this was in 1995, and digital wasn't up to snuff, so they had to do this with 35 mm film, which meant building a custom camera. So I went looking for some info on this miracle of modern technology and found...well, a swamp full of alligators and techno-jargon. 35 mm hasn't died completely, but it is going away fast. The big problem is the cost of film. It was bad enough when you were shooting snapshots with your Instamatic, but shooting movies is like shooting a machine gun. Only the truly crazy are willing to spend the money to keep the machine fed.

Got some clues about the camera, but did not manage to actually track it down. At least I don't think I did, kind of hard to tell at this point. Did come across this video that gives a pretty good rundown on just what's involved. It get's a little repetitious when he starts talking about the magazines, but it also serves to remind us just how arcane film technology is. Everything involving film has to be done in absolute darkness. Totally black, lights out. One little slip and a thousand bucks worth of film becomes worthless.

Since the truly crazy are so few in number, it has come to pass that movie cameras are a niche market, something like supercars, with corresponding price tags. Now would be a good time to pick one up for posterity's sake, before they find their way to the scrap heap like the printing presses did. They aren't dead yet, as this page shows, and Panavision and ARRI, whoever they are, are still fighting the good fight.

Notes:
Film: a "two reeler" that runs for two hours is going to have a mile of film on each reel.
Steadicam Operators newsletter from 1995. The jargon is darn near impenetrable.
Story about the opening POV shot of this movie, along with hour long audio talk by the director.
STRANGE DAYS Scriptment by James Cameron
Posted by Chuck Pergiel at 12:58 PM