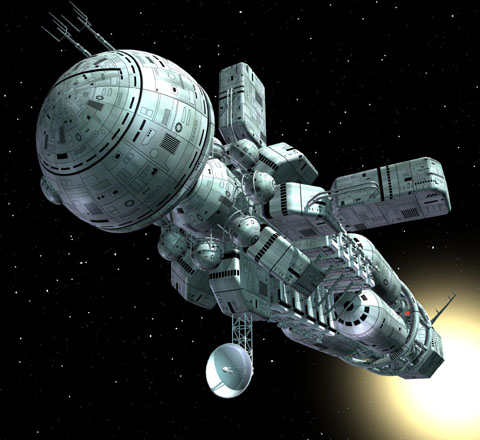 I've been thinking about how to build a starship, and I'm thinking a linear accelerator sending iron particles out the back might be a viable method for obtaining a decent amount of thrust over a long period of time. I don't know how long it would need to be. SLAC (Stanford Linear Accelerator Center) is about two miles long and they get things going pretty quick. Of course, they are only accelerating sub-atomic particles, stuff with no appreciable mass. I suppose it depends on how strong your magnets are and how much electric power you can generate to power them. One advantage we would have is we are already operating in a darn near perfect vacuum, so we aren't going to need a sealed tube to keep the air out, or vacuum pumps to remove it. Matter of fact I think all we really need is a spiral of wire. At the front end the loops of the spiral would be very close together. As we move down the accelerator toward the aft end, the loops would get farther apart corresponding to the increasing velocity of our reaction mass. At the end, our wire would be pretty near straight, making one loop around the path of our stream of iron every couple of feet or so. We would launch a particle of iron down the center of this spiral and pump a jolt of electricity to the spiral itself. The power would flow down our accelerator at the same velocity as the iron. At the beginning, the particle's velocity would be low, but the current would be following the wire around and around the iron's path. The magnetic field produced by the current in the wire would propel the iron particle along it's path. As the loops in the spiral spread out, so would the velocity of the particle increase.

We would need some kind of framework to hold the wire in position, and absorb the reaction from the magnetic field pushing on the iron. Being as our accelerator might be fairly long (one mile? ten miles?) it would also need to be rigid enough to hold its shape. This could lead to it being fairly massive. Since we are going to be running this thing for several years, we are going to be sending a sizable amount of reaction mass out the back. Perhaps thousands or even millions of tons of iron. As we consume our reaction mass, our rate of acceleration will increase. In the later part of our journey we would not need as much thrust as in the beginning. Perhaps what we could do is build a bundle of these linear accelerators, perhaps a dozen, perhaps a hundred, perhaps more. We take off with all of them running. After the first fraction of our journey, we shut off one accelerator and start taking it apart. As we take it apart, we grind it up and use it as reaction mass for the remaining engines/accelerators. This way we maintain a relatively constant mass to thrust ratio, and if our thrust is high enough, a relatively comfortable environment for our crew.