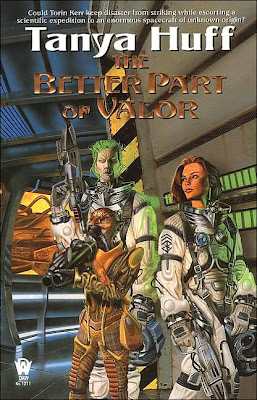 US Marines in space, except they're from some confederation, they have a mixed group of bipeds for soldiers, some human, some not, and gender equality, meaning Sarge is a girl. Roberta's short story from last week could have been the opening chapter. It's a pretty good story: Marines in close-quarters-combat with evil bugs, cut off from resupply, saddled with political restrictions and obligations, and a battlefield that changes on whim.
The girl on the cover is too pretty to be Sarge. Does that make me sexist? Are there any good looking women sargents in the armed forces? I suppose there must be. I have a hard time reconciling a hard-ass attitude with a pretty face. Foolish me.
There is also a leading man, after a fashion. Sarge takes an immediate dislike to him for no discernible reason, and continues to be pissed off at him for most of the book. I'll leave the ending to your imagination.
There are a couple of interesting technical bits. At one point the floor inside the alien spaceship turns to "quicksand" from which there is apparently no escaping. Once you touch it there is no pulling back. The only way to escape would be to cut off whatever part of your body was touching it. Our heroes consider this in one instance (only the tips of the fingers on one hand), although once you are in it up to your waist, that option is rather pointless. What isn't explored is whether you would be able to pull your hand out of a glove, or a foot out of a boot, if the stuff wasn't actually in contact with your skin.
A similar concept is used for "gates" used for teleporting, ala Stargate. All cases I have seen of that, you go through in one smooth motion, don't hesitate, and don't stop, although for a bidirectional gate maybe that wouldn't be a problem.
I am trying to decide whether finding yourself suddenly sinking through the floor would be a terrifying experience or not. On one hand your are sinking, on the other hand floors don't do that, so who knows what is really going on? It wouldn't be hard to make it horrifying. In this book Sarge faces it with same attitude she faces everything: just one more trial to be endured.
There are some decent space fighter sequences. Any time we have a story with manned fighter craft in space, we are presuming upon a very advanced level of technology and possibly the repeal of several laws of physics. I keep wondering what kind of tactics would be realistic, but it keeps coming back to what are you capable of? I liked the opening scene in Lost in Space with the transparent spheres.

The title comes from a line spoken by Falstaff in Shakespeare's Henry IV:


'The better part of valour is discretion; in the which better part I have saved my life.'