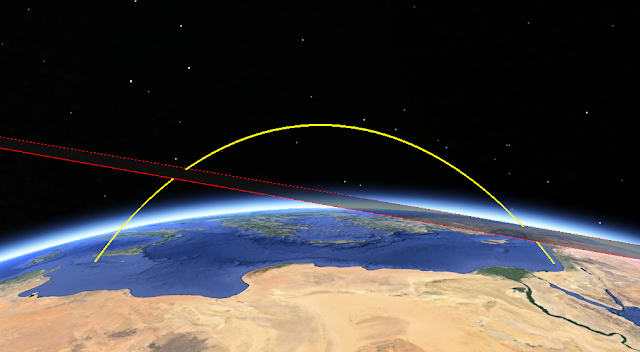 Flight path of Israeli Missle. We are looking North over Africa. That's Sicily near the left hand end of the yellow arc and Israel near the right hand end. I suspect the diagonal stripe is the plane of the radar's horizon. It can only see things above the plane.

Somebody launched a missile from the central Mediterranean a couple of days ago. The Russians picked it up on their radar and eventually the Israelis fessed up to firing a test target, something for their anti-missile missles to shoot at. Shooting a missile off without telling anybody can be a little scary. Shooting it at yourself makes it a little less so. The target area was somewhere off their coast. 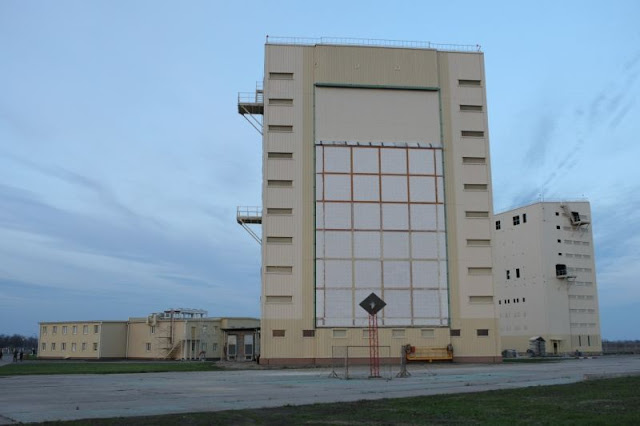 Voronezh-DM Radar installation in Armavir, Russia. Doesn't look like much but it is a big improvement over previous Russian radar systems. This one has a power of 700 kilowatts. Previous generation transmit power was in the hundreds of megawatts. Big commercial radio stations in the USA use 50 kilowatts.

Voronezh-DM Radar works in the decimeter range, which means it has a wavelength of about 4 inches and operates at a frequency of about 3GHz. It has a range of 3,500 miles and is capable of tracking 500 objects simultaneously.

where D is the distance to the horizon in nautical miles and h is the height of the ship's aerial amsl.

Once again the English system is proven superior to the metric system!

That was not my point. The radar is intended (only) for tracking ballistic weapons.

A Tornado GR4 travelling at 100 feet at about Mach 1.5 pops up above the radar horizon just 25 miles away, they have just 80 seconds warning :-)