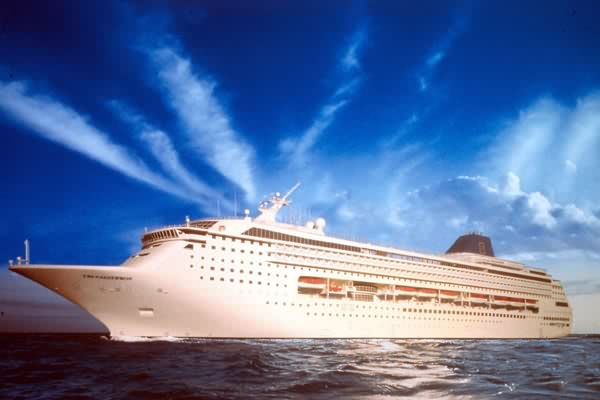 I don't know what brought this to mind today. Maybe I overheard someone talking about cruises, or bad weather or something. Anyway it reminded me of this little adventure we had.

Several years ago my in-laws took my family on a cruise of the Caribbean during Christmas vacation. We flew to Orlando the week before to visit Disney World for a few days. The first night we got there they had a record low which killed all the poinsettias by the front gate. The next day the gardeners were out in force replacing them. It was supposed to be warm and we were not prepared for cold weather. I ended up buying a Mickey Mouse black knit hat. The one good thing about the cold weather is that there were no crowds.

The cruise took us to the Bahamas, St. Thomas and the Virgin Islands. The weather was a bit rough. The Captain told us it was the roughest cruise they had ever been on. Most of the passengers and a good part of the crew were seasick. Even I who hardly ever gets seasick was suffering from it. I took some Dramamine and it helped, but it made me very sleepy. My wife was absolutely miserable and spent most of her time on the upper deck by herself, wrapped in blankets. This was the pool deck where you see all those pictures of happy people playing in the pool. Not this time.

I spent quite a bit of time exploring the ship with my daughter. The inside of the ship was seven stories tall and my daughter has an aversion to elevators, so we would take the stairs. After climbing up and down several flights, I developed a technique for going up the stairs that made it much easier. The ship was pitching quite a bit, the bow would go up and then the bow would go down. Each cycle took several seconds. If you were on the forward stairs and you wanted to go up, you would stand and wait while the bow was going up, and then when the bow started going down, you would sprint up a half a dozen steps or so. It made it very easy to climb the stairs. The pitching ship did all the work.

Sometime later I read that the same ship we had sailed on was now doing cruises to Alaska. While on a such a trip they had a rudder malfunction somewhere North of Vancouver B.C. Caused the ship to make a sharp turn and go in a circle. Lot of damage to the crystal in the gift shop, but that was about the extent of it.

Note regarding the picture: between the time I found this picture on the internet and when I finished posting this entry, the picture disappeared and was replaced by some business logo. I really like the angle of view and the sky in the background, so I was a little irritated that it got pulled. I also was surprised that blogger hadn't made a copy. A friend of mine had told me that somebody was archiving the internet, so I looked up the web site and after a couple of clicks I was able to locate the picture and save it off on my hard drive. So now the link from the picture points to the archived page instead of the current page.

Email ThisBlogThis!Share to TwitterShare to FacebookShare to Pinterest
Labels: Travel