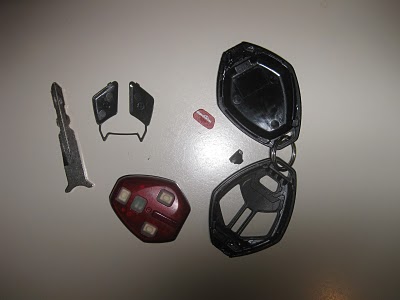 My wife called at 7:30AM and woke me up to tell me that the key for her car had broken and she couldn't get it started. The girls had driven downtown early for an exercise class at The Bar Method and now my wife needs to go to work. Right. Pull on my trousers, grab the extra key, put on a ball cap to cover my hair and get going. Smooth sailing until the traffic stops. I don't even remember where. It's raining. After that it's a 5 MPH crawl into town. Took me an hour to get there, twice as long as yesterday. I can't believe there are so many people who are willing to put up with this every day. It's just crazy.

It wasn't much better going home. Ended up 15 minutes late for a dentist appointment. I thought about canceling, but they had set aside time to work on me, and they would probably rather spend their time working on me and making money than twiddling their thumbs, even if I haven't had a shower. Surprisingly they didn't ask me to remove my hat. Suited me. No sense offending them with scary hair as well. I was only there for a cleaning, but it didn't seem to interfere with their work.

The key has a remote control built into the handle, and an anti-theft transponder as well. Looking for locksmiths all I found were these emergency 24 hour guys who will come out and rescue you when you lock yourself out. The lock shops where you went to get keys made all seem to have gone bye-bye. Fine. Called the Mitsubishi dealer. They will gladly order a new key for me. Cost: $120, plus a $50 programming fee, and it will take four days to get here. Yowzer.

Right now I'm hoping I can get a simple metal key made and still use the electronics from the old one. I don't really need the remote, the car still has an outside mechanical lock, but I do need the transponder. I was hoping I wouldn't, but I just tried it, and without the electronics the car won't start. And then you get a little flashing green indicator on the dashboard with a picture of a key. Isn't that cute?! These things work by being in close proximity to an antennae near the ignition switch. You can have the key, and it will turn the ignition switch, but if the transponder doesn't respond, the engine won't start.

Our Chrysler has one of these, but the remote control is separate, and the key looks and feels more substantial, but who knows how strong it really is? In any case, it hasn't broken yet.