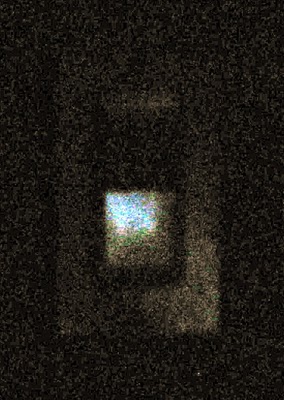 We have been watching The Good Wife on my computer down in the basement. We just finished the last episode last night. We get up to leave and I notice that the screen is almost perfectly reflected in the surface of the light switch. It is one of these new fangled rocker switches where each half of the rocker is about an inch square. The barely visible larger rectangle is the wallplate surrounding the rocker. The original picture is pure black, but Picasa's I'm Feeling Lucky button and cropping got us this. Yes, I know, you can't tell what's on the screen. I just wanted to see what I would get. Picasa's machinations delivered the color, but it wasn't visible until I cropped the image and it appeared at 1:1. Scaling the picture down causes the color to disappear into shades of brown.

This is the second time I've tried to find a picture in an apparently pure black image. The first time worked much better.

Email ThisBlogThis!Share to TwitterShare to FacebookShare to Pinterest
Labels: Pictures