When I first saw this, I wasn't sure what I was looking at. It's in Kazakhstan, which is over there on the other side of world along with Afghanistan and Pakistan and all the other 'stans. I mean it kind of looks like a desert, which wouldn't be out of place in that neighborhood. 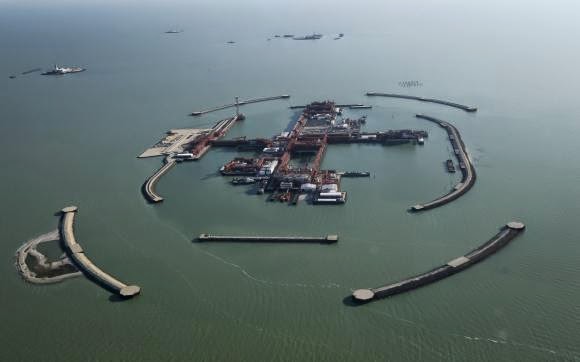 This is an artificial island constructed in the Caspian sea as part of a project to exploit the Kashagan oil field that lies there. Posthip Scott send me a link to good, concise video (that is not embeddable) that gives an good overview of this project, along with a link to a well written story about this project. The Wall Street Journal also has a short video about the problems this project is having.

Seems a consortium of oil companies has sunk $50 Billion into this project over the last 20 years. It is a challenging project even by oil company standards. I mean they are regularly drilling for oil in water that is a mile deep. A comment in one of videos mentions that the $50 billion that has been spent would be more than enough to send a man to the moon. It's also about half what the USA spends every year on our "war" in Afghanistan.

The world runs on oil, so I can understand why these guys would be willing to sink that much money into this project. After all, this is the biggest find since Prudhoe Bay in Alaska was discovered 40 years ago. The part that gets me is that all the oil they expect to reclaim from this field will only satisfy our civilization's thirst for oil for one steenking year. Oh, it will take much longer than that is suck it dry, but if you add it all up, it is just a drop in the metaphorical bucket. We need a new oil field discovery comparable to this one every year. We don't get them, of course, so we have guys scouring the world for whatever they can find. Makes me wonder why everyone doesn't have a job prospecting for oil, but let's try and stay on topic, shall we?

One of the biggest problems with the Kasagan (cash again) oil field is the presence of hydrogen sulfide gas, and it's not here in just the trace quantities that are enough to produce that familiar "rotten eggs smell" that comes with many oil wells. Here it is a sizeable fraction of what comes out of the well, and it's under high pressure: 12,000 PSI (pounds per square inch). That's a bunch. There are plenty of everyday industrial techniques that deal with high pressures, like Natural Gas pipelines, Oxy-Aceteline gas welding tanks, and the hydraulic systems you find on everything from garbage trucks to the power steering on your car. But all those everyday systems only operate on two or three thousand PSI, not twelve freaking thousand. I am not sure anyone even makes any kind of hose that will handle that pressure, which means that all the plumbing has to be done with pipe, and not just ordinary, extra-strength, high pressure, steel pipe. Oh, no, that would be too easy. Seems hydrogen sulfide gas is not just poisonous, but it is also corrosive, and at high pressures it is extremely corrosive. So you need special non-corrosive lining in your high-strength, extra high pressure capacity pipe.
So they have spent all this money, built all this drilling and processing equipment, hauled it to the far side of world through the Don-Volga Canal, drilled the wells and laid the pipelines. But now we have another problem. I expect this is just the zillionth one this project has run into, but it's something that even non-engineers can understand, so let's make the most of it.
The pipeline started leaking. It's bad enough that it's full of oil and it runs through an environmentally sensitive area (has anyone ever run a pipeline through an area that isn't "environmentally sensitive"?), but it's also full of this deadly poisonous, nasty, corrosive hydrogen sulfide gas. Surprisingly, they shut it down. From the way the oil industry is portrayed in the press, I would have expected them to charge on full steam ahead until the piles of dead Kazakhstani's were visible on Google Earth. But they didn't.
One guy mentions the pipes were fine when they were delivered, but then they sat out in the desert for several years, unprotected, before they were finally connected up into the pipeline. Hard to imagine that a little ordinary weather could affect an anti-corrosion coating that is supposed to resist the devil incarnate (hydrogen sulfide), but maybe it's a matter of chemistry.
Anyway, I'm kind of wondering how they protected the joints between two sections of pipe. Pipelines are normally welded, and the heat from welding is going to destroy any kind of coating on the inside of the pipe, so how are you going to reapply the protection to the inside of the joint after you are done welding? I suppose you could use something like a paintbrush on a 40 foot pole, and a video camera to check your work, but boy, would that be tedious. I can see how somebody might slip up occasionally, and that's all it would take.
It looks like it will probably be cheaper to build a new pipeline than to try and reclaim the old one. Whoops, there goes another billion dollars.

Posted by Chuck Pergiel at 2:01 PM