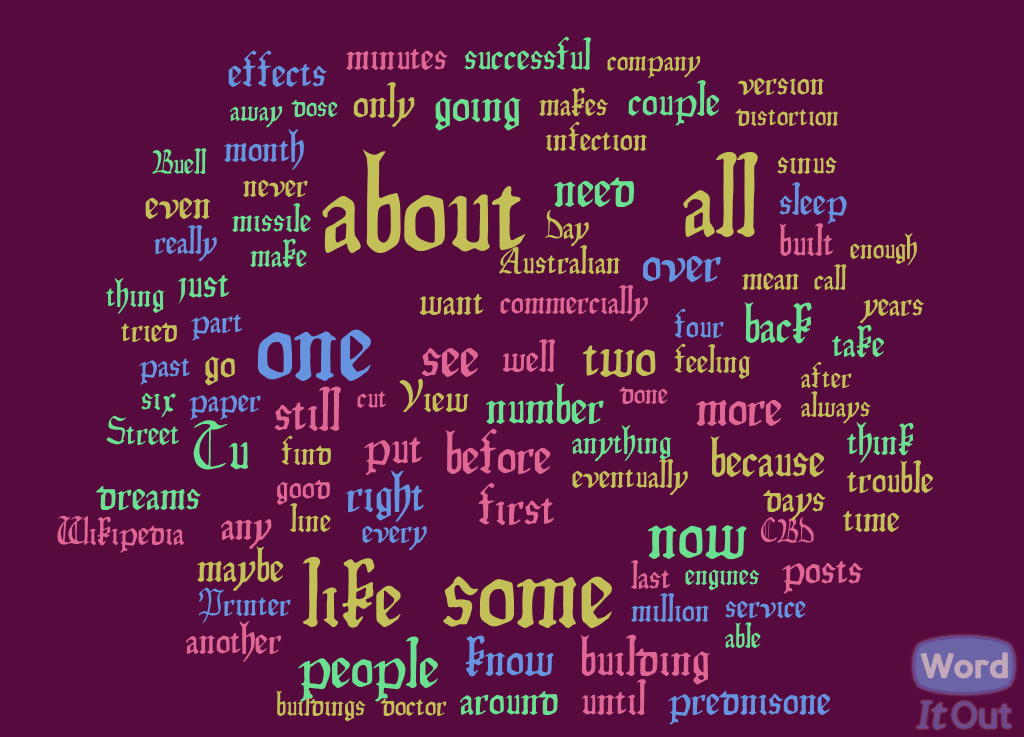 Current Pergelator word cloud. At least "really" is no longer front and center.

A while back, when "word clouds" were all the rage, I thought I would put one up on my blog. When I did this one word appeared front and center and that word was REALLY. I don't know what I was hoping to see, but that was definitely not it. I didn't post the word cloud.
At our gang's Thursday Lunch there is one fellow who shows up intermittently. He has an annoying habit of saying "really?", or "oh, really?", in response to whatever you might tell him. It makes him sound like a dolt. However, because of the company he keeps, and his varied interests, I suspect he is not. His use of "really" might be similar to mine - protective coloration in 'Marika. He also, at one time, pointed out that I talk like I write. At the time I didn't really understand what he was on about.
Since then I have noticed that my conversational style, such as it is, does not mesh well with the rest of my family. They don't have conversations so much as they banter. Words fly back and forth, nary a complete sentence is ever heard, but they all seem to understand each other fine. I have only a vague idea of what they are talking about, and when I do understand I do not find it that interesting. It seems to be more about adding on to the conversational thread rather than trying to communicate "a complete thought".
My friend Jack tells me about another friend of his who is even more extreme than I am. When I am relating a story I may ignore interjections or continue talking right over the top of them. Randy gets annoyed if he is interrupted during his recital.
Older son often complains that I will say something provocative, like "bees are vicious" or something equally blue sky, and then fall silent. He sits quietly waiting for me to continue but when the seconds stretch on he gets impatient for me to finish my thought. I now realize this happens when I am trying to formulate a new story. Once I have managed to complete the thought, the retelling goes much smoother.

P.S. Blogger is out to lunch this morning. The "word cloud" at the top of this post is supposed to be centered above the text. When I posted it, the image showed up on the right hand side and the text started at the top on the left hand side. Stupid Blogger.
Posted by Chuck Pergiel at 3:27 AM