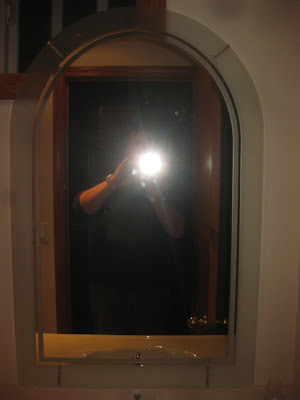 The mirror in the basement bathroom tried to fall off the wall. Fortunately I noticed its' precarious stance before it let loose completely. Now how do I fix it? I mean the glass isn't broken, or even damaged. The glue that was holding it to the backing board was coming loose. There was just one larger patch near the bottom that was still hanging on. Yes, I could throw it out and just go buy a new one, but that goes crossways with me in about six different ways. Let's see if we can fix it.

Originally the mirror was simply glued onto the backing board, and the backing board has the hardware to hang it on the wall. Well, let's just get some glue and glue it on. Hold on a second there buckwheat, just what kind of glue are you going to use? I had a mirror replaced on our old Windstar and they used the wrong kind of glue and it destroyed reflective surface. I look on the net and I don't really find much. Everybody recommends Liquid Nails, but then they say do not trust the glue alone, use mechanical clips as well. As Snigs says, >.<.

I don't have any Liquid Nails and I don't want to go buy a whole big tube when I am only going to use a smidgen. I do have a tube of contact cement. If it works, great. If not, I'm not really any worse off than if the mirror had fallen. I use the whole tube and let it set for a day. It doesn't destroy the silvering, and it seems to hold just fine. But how long will it last? If it lets go, we are liable to have glass shards from here to Topeka, not to mention being out a mirror. Can we rig up some kind of mechanical backup? We can. I make up some clips from some brass picture hanging hooks and wire them to the backboard with safety wire. Forgot that two inches of the outer edge were translucent so you can see them. Two at the top at the 45 degree position, and two along the bottom.

Question is, are they stylishly modern, being all brass and stainless-ly, or simply hillbilly tacky? I suppose it doesn't matter, it's in the basement, it's on the wall, and it only cost a dollar (for the hooks). I count the glue as free, the tube was already opened and if I didn't use it for this, it would probably sit around until it was completely dried up and useless.

Posted by Chuck Pergiel at 8:25 PM