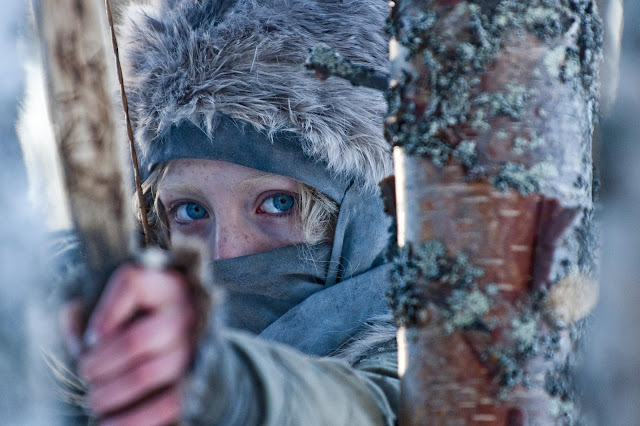 A pretty interesting movie, especially the first half when you don't really know what is going on. After a while it becomes apparent that we have an evil agent working for an evil government agency that is out to kill our two heroes in order to eliminate any evidence that the evil agency, whoever they are, were ever involved in some reprehensible scientific research, or whatever they were doing. Cate Blancett plays the role of evil agent, and she plays her role well. She pulls out this West Texas accent whenever she want to convince someone of her good intentions, which I did not understand. Is that accent supposed to be folksy and downhome? Wouldn't a pleasant tone of voice do as well? Why use the Texas accent, unless we are trying to pass along the message that maybe you shouldn't trust someone just because he has folksy, downhome accent?

The longer the movie plays, the less things make sense. When Hanna is initally captured she has no trouble killing everyone within sight, but soon after that she starts letting people off. Some are reasonable, they were no immediate threat, had not harmed her, and did not appear they would be able to hurt her. Others were obviously bad guys, they were a serious threat, she had the means to take them out, but she lets them go. As near as I can tell, this was only to prolong the chase scenes. And then there's the old sneaking up while the camera isn't looking business. I hate that shit. Once in a while, it's okay, especially if it is believable, but you only get to do it once per movie. You pull it more than once and you are being a jerk.

And then there's the denouement. Cate in dress shoes (at least they weren't spike heels) and business dress chasing a teenager around an abandoned amusement park, and she catches her? Who are you kidding? At that point it has pretty much fallen completely apart, but don't fret, it's almost over.

The first part of the movie, set in some snow bound woods, was really good. The parts with the hippiesque family were pretty good. We don't find out what happens to them, but given how evil these evil agents have been up to this point, it's probably not good. There was a chase sequence in some concrete tunnels that I think may have been shot in the old Nazi wind tunnel in Berlin. That was kind of cool.

Email ThisBlogThis!Share to TwitterShare to FacebookShare to Pinterest
Labels: Girls with stuff, Movies