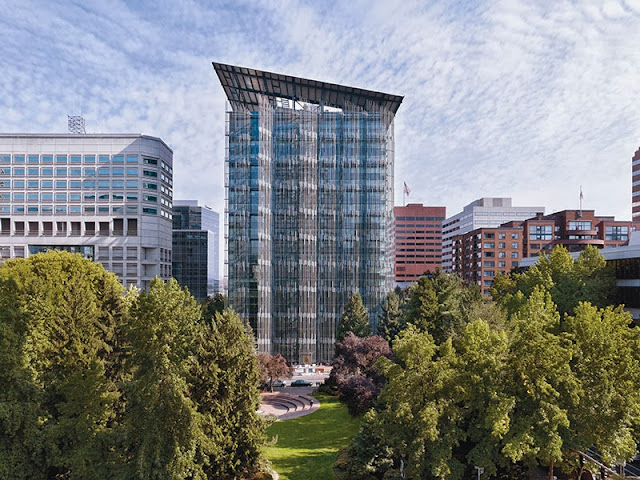 I'm Westbound on Hawthorne Boulevard yesterday evening, heading into downtown Portland and I see what looks like a giant billboard on top of a skyscraper. That's weird. I don't remember seeing anything like that before, and why would you put a billboard on top of a skyscraper, unless you were going to illuminate it, but this thing is just black. So I did a little checking. Turns out it's a solar power array on top of the recently renovated federal building. They spent $140 million dollars fixing up this 40 year old building. The building has 370,000 square feet, so that works out to about $400 a square foot. They expect the renovation to save about $1,000 a day in utility costs, so it will pay for itself in about 400 years. Seems a little excessive, but maybe they learned something that we can all benefit from. Or maybe utility prices will skyrocket and the savings will increase in value.
Also seen in downtown near Portland State University yesterday:

63 kW solar power system built by REC Solar for TriMet’s South Terminus Station. This one is down at ground level.