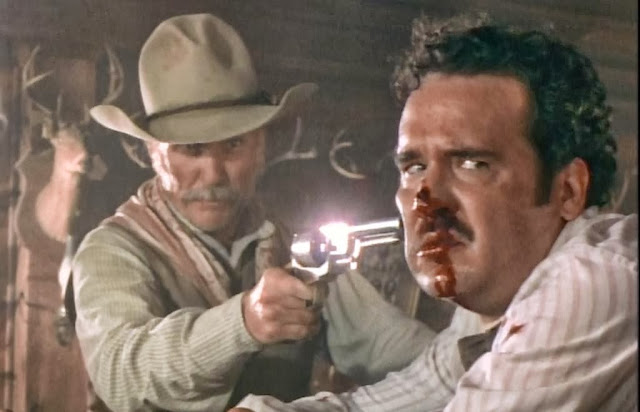 After breaking the bartender's nose on the bar Gus takes out his pistol and says:Now if you'd care to turn around you can see how we looked when we were younger and the people around here wanted to make us senators. Now the thing we didn't put up then was dawdling service and as you can see we still don't put up with it.

Driving home past the local elementary school yesterday just when parents are collecting their chilluns. There are some people standing near the corner talking. About half the group is white and are standing on the sidewalk. The other half is black and they are standing in the crosswalk in the middle of the street. They were not blocking my path, that crosswalk crosses a side street that does not get much traffic, but still! Why are you holding a conversation in the middle of the street? To me this just smacks of stupidity, or rudeness. There is no reason to be standing in the street like that. You could just as easily have your conversation while standing on the sidewalk. Standing in the crosswalk means any traffic that does come along is going to have to look out for you, and anytime you depend on other people to do what they are supposed to do you run the risk of being disappointed. In this case fatally.
A few years ago I was at the local community college and I come up behind some black kids sauntering down the road. They are crossing the road, but at such an extreme angle that they would be 200 feet farther down the road from where they started when they got to the other side. I wasn't in any hurry so I just sat and waited for them to complete their moseying, because it was moseying. Normal walking pace is about three miles an hour. This kids were barely making one. What I don't know is whether that was their normal pace or whether they were deliberately dawdling to piss off the old redneck in the pickup truck who was breathing down their neck. I don't understand slow walking. The reason you are walking is to get someplace. Do some people enjoy walking that slow? Or is it a form of rebellion? Or just lack of impetus?
It might not be a race thing at all, it might just be city slicker versus country mouse. 25 years ago this was a sleepy farming community. If you saw someone you knew while you were driving, you could stop in the middle of the street and have a nice long conversation and be reasonably confident that no one would disturb you. I come from the suburbs where people have to be on the go constantly in order to feed the giant money machine, so no, you don't have time to stop and talk to people, and you sure don't stop in the middle of the street because some madman racing down the street will be running you down.

Posted by Chuck Pergiel at 3:38 PM