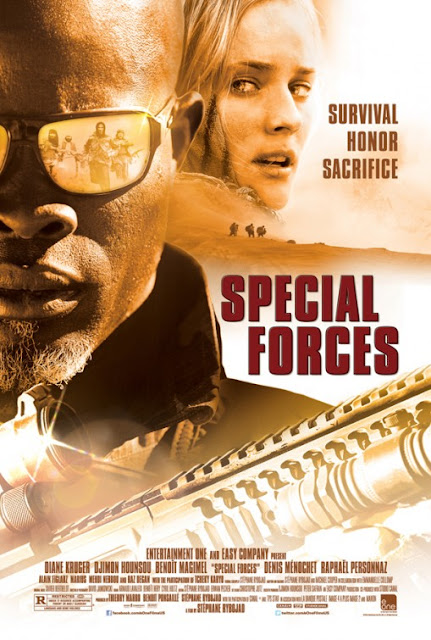 I'm not too sure about this movie. On one hand I want to say the French Special Forces were very well done. On the other hand the story might be a bit far fetched. We (and by "we" I mean Western civilization, in this case the French) drop a squad into Pakistan to rescue a kidnapped (blond, beautiful, female) reporter from the evil Taliban. One of the bad guys takes it personally that his captive has been rescued and he sends a hundred gun men in pursuit. The good guy's radios get busted, they get cut off from their pickup point, and end up having to hoof it over the mountains into Afghanistan. It takes them 12 days, 12 days of running gun battles. I lost track of how many bad guys they shot. It's 82 miles from Peshawar to Jalalabad. I know walking over the mountains can be slow going, but how did the bad guys get ahead of them?
There were several scenes where the camera is moving in a circle around the people which gives kind of a whirling effect to the background. Once or twice is more than enough. They kind of overdid it here. A few more long distance landscape shots would not have been out of place. Afghanistan is some of most hostile terrain on Earth.