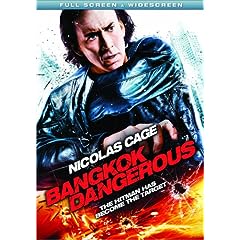 I still have trouble getting our DVD player to give the disk back. Once you've loaded the disk, pressing the open button just gives you an empty carousel. Last night it only took two button pushes to get the disk back, so maybe I'm learning.

Anyway, the movie was just OK. Aging stone cold assassin develops human feelings and chaos ensues. Lots of long lingering looks which I suppose were supposed to convey some meaning, but there really wasn't much there. And what was it with his hair? Don't they have combs in Thailand? Geez, even the bums on the street look better than this.

Instead of the car chase they had the hot rod canal boats which reminded me an old James Bond movie (Roger Moore, I think). I really liked the girl from the pharmacy. That's about all I can say for this movie.
Posted by Chuck Pergiel at 6:36 AM

Email ThisBlogThis!Share to TwitterShare to FacebookShare to Pinterest
Labels: Movies