Thanks to my wife, we went to movies last night. Being a cheapsake and disliking crowds I tend to overlook new releases. They'll be available on DVD in six months and we can watch it for cheap. So we waffled for a bit, but she finally decided we should go, and I'm glad we did.

What a great film! Clint plays the curmudgeon to a T. Reminded us of my father. A lot. Not the swearing, or the racial epithets, but the whole attitude, the expressions on his face, the grunts and the growls. And boy is he (Clint) old, a lot like my father was. For dealing with some unpleasant issues, it was a surprisingly light hearted movie, with any number of howlingly funny bits. And then there's the fairy tale ending, well a sort of fairy tale. Great movie, but then I've always liked Clint.

In the film, Clint's character is a Polack, and as he bears some resemblence to my father, who was Polish, I wonder if maybe Clint is also Polish.

There was one thing that was notable for it's absence, and that was the predictable retort when someone tells Walt (Clint) that he should quit smoking. It happened a couple of times, and both times I expected Walt to reply, something to the effect, that he was so old that quitting now wouldn't make any difference. But he didn't say anything. I guess that goes with the curmudgeon aspect of his character. He had this exchange so many times there was no point in even acknowledging the comment. 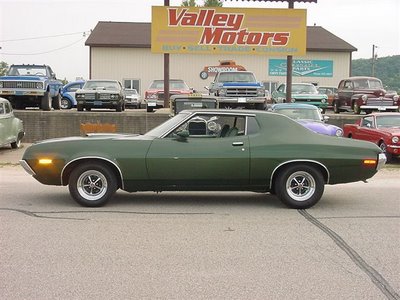 Can you believe this is the best picture I could find of the car? I could only find one picture of the car from the movie, but this picture had Angeline Jolie standing in front of it! Waaaa? She wasn't even in the movie. Movie people are so stupid. I found one other picture of a green Gran Torino, and the background in this one was just trash. Found lots of pictures of the red and white one from "Starsky & Hutch".