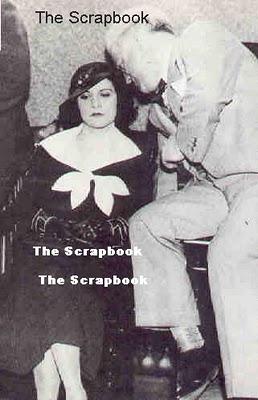 We watched Public Enemies on PPV last night. You never saw so many Tommy guns. It was intense. It felt a lot like Inglorious Basterds. I wonder if that was because you knew things were not going to be turn out all right.

Billie Frechette's (Dillinger's girlfriend, picture) story was especially affecting. Maybe it's just because I'm a sucker for a pretty girl.

There was one shot during a bank robbery where Depp (as Dillinger) leaps over a bank counter, one hand on the counter, and the other hand holding a Tommy gun. That was impressive. Those blinking Tommy guns are heavy, though I suppose your adrenaline would be up, it is a bank robbery after all.

There was another scene where Mr. Dillinger and his gang stop off to talk to a mob guy who is running a telephone bookie operation. There is a bit of a flare up over protocol, and everybody pulls out their guns. One of John D.'s henchmen pulls out TWO Tommy guns quicker than you can blink. He had them hanging from a strap. One end of the strap was secured to his shoulders (or maybe just around his neck), the other end was clipped onto the gun somewhere around the trigger guard. He was wearing one of those heavy overcoats that come down past your knees, so when he is just standing there the guns are hanging by his sides inside his coat. Open your coat, grab the guns, haul them up to elbow height and you are ready to create mayhem.

Bye, Bye, Blackbird was John & Billie's song. I didn't like most of the versions I found. They all seem have added some special phrasing to the words, putting in little "dramatic" pauses. Why can't anyone just sing the song? Then I found this one:

When John & his gang visit the bookie (after they settle the disagreement over protocol), the bookie explains why the mob won't be helping them out any more: they are drawing too much heat, and they aren't making enough money. The book-making operation pulls in as much cash every day as John got from one of his bank heists. They don't want anything to impinge on their operation. That got me to thinking. Maybe the country is going broke, not because of the G.W.'s War On Terror, but because people are giving it to the casinos.

Update December 2016 replaced missing picture.
Update February 2019 replaced missing video. Couldn't find what I had in there before, don't remember what it was either, but I'm pretty sure it wasn't Josephine Baker. Her version is okay.
Posted by Chuck Pergiel at 1:31 PM