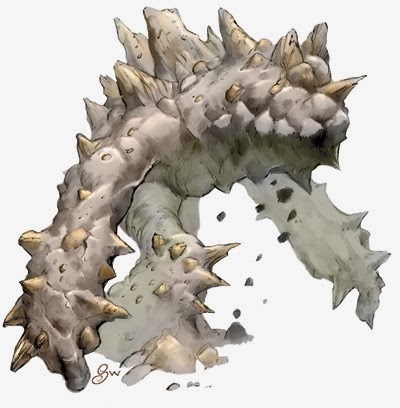 I've been thinking about what aliens might be like if we ever run into any. Shoot, they might be here on earth, but so different from us that we don't even recognize each other, much less as living beings.

A few months ago I was reading the Dinosaur Planet series by Anne McCaffrey (not really all that great) but there was an alien race called the Thak (sp?), who were large, brick-like creatures with exceptional travel abilities. Yesterday I read about the latest impact crater discovered in Africa, only now made visible from a satellite because of deforestation.

This morning I read about a woman who wants to put an accelerometer into every PC to form vast network for monitoring earthquakes. Then there are the tube worms who live around hot water vents on the bottom of the sea.

Put these all together and I came up with creatures who are burrowing in the earth, ever farther down as their planet cools. The only decent source of heat is the core of the planet, and it's been cooling down for eons, so the temperate zone has receded from the surface of the planet, and as it has receded, the creatures have had to adapt to burrowing ever father down.

The have developed exquisite sound/vibration sensors/communications, so if anything lands on the surface, they would know about it. Perhaps not right away, but they would notice an anomaly, which might prompt them to launch an investigation to the surface to see who dares to tread on their planet.

Lego has their own take on this subject:

Update January 2018 replaced link to story about a crater. Old link went to a Graham Hancock story that has gone 404. New one goes to a BBC story of the same vintage.
Posted by Chuck Pergiel at 7:39 PM